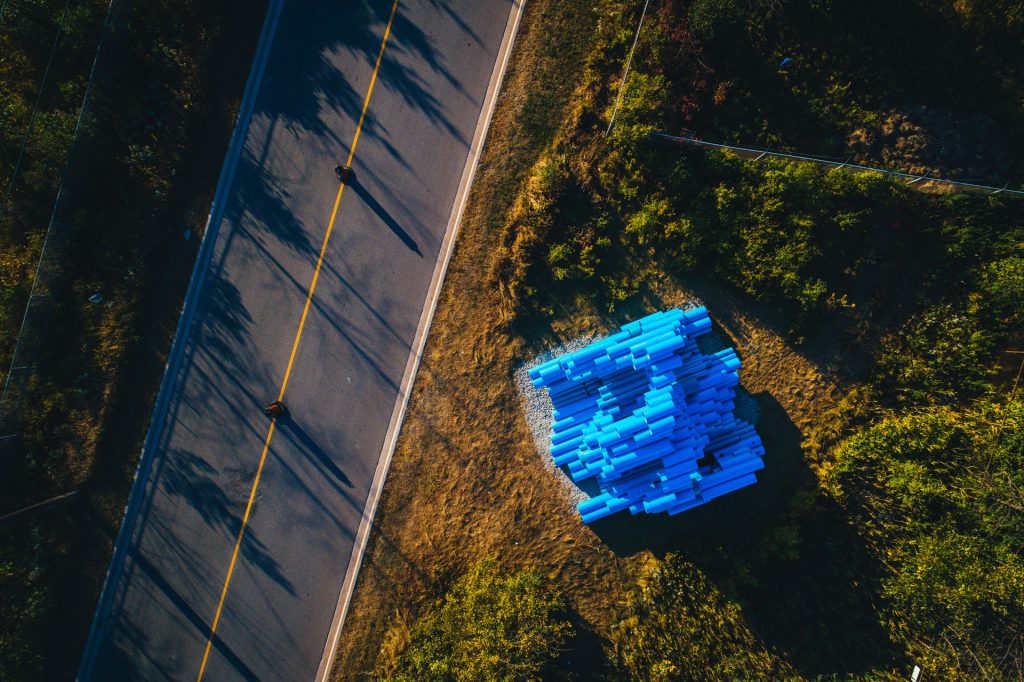 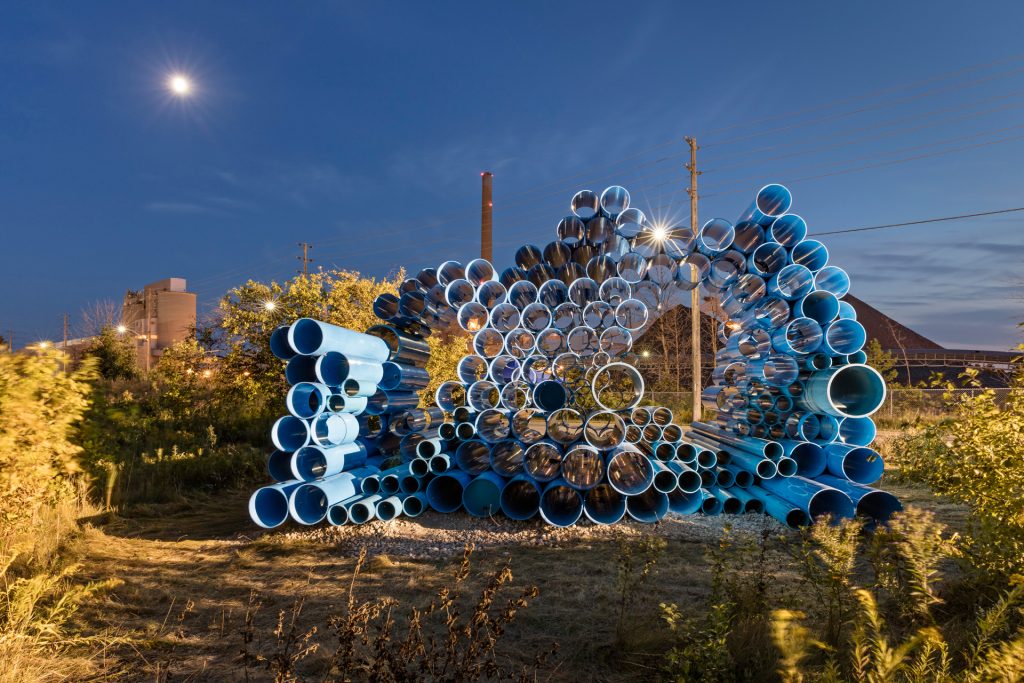 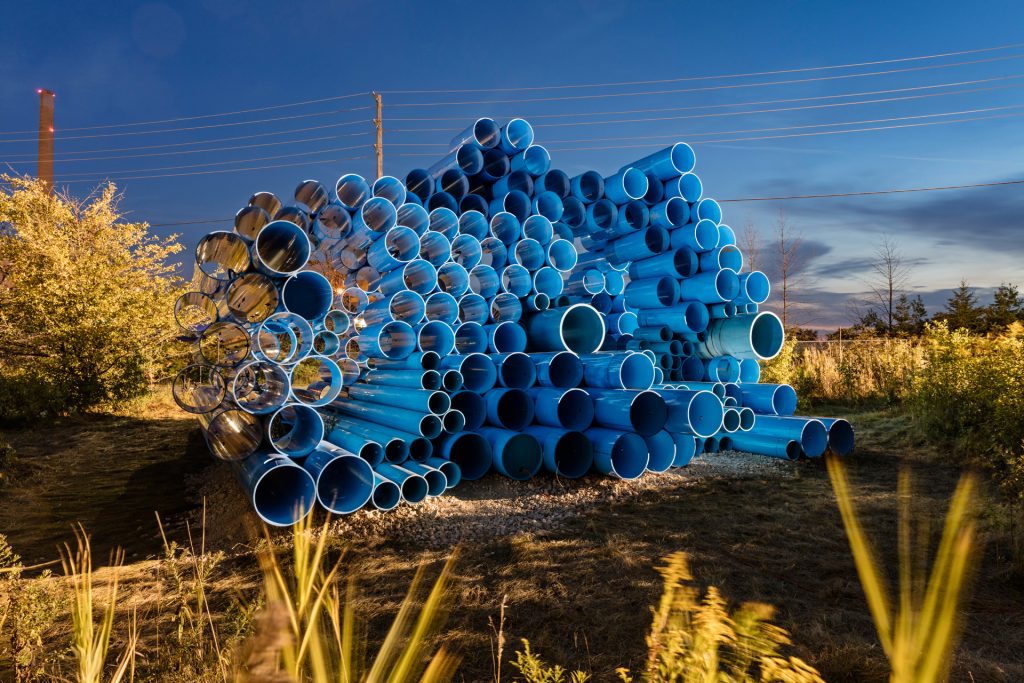 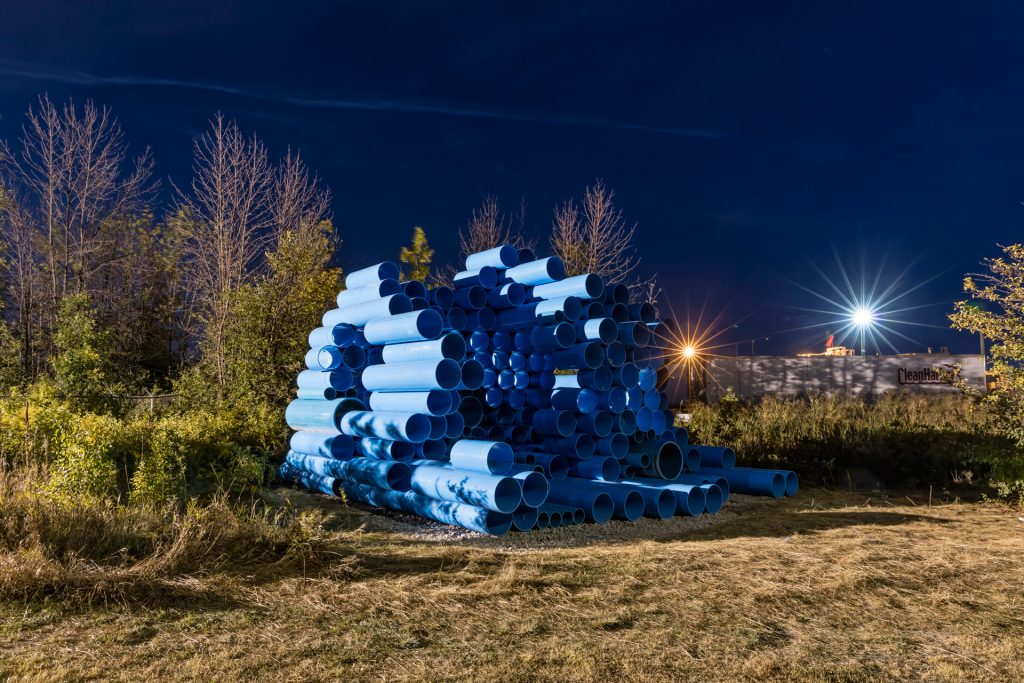 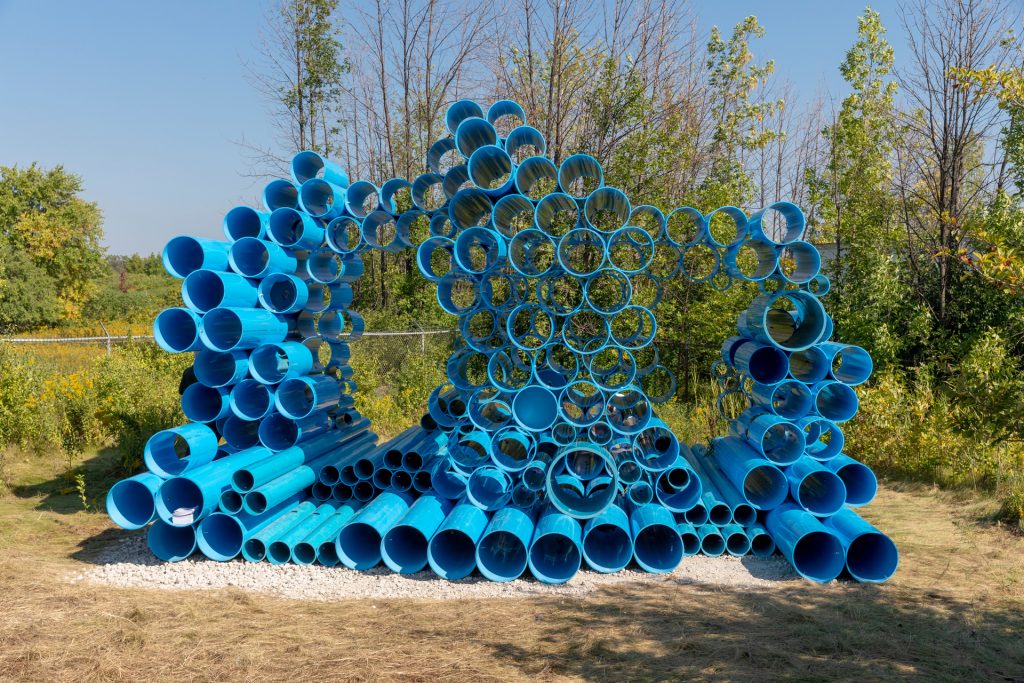 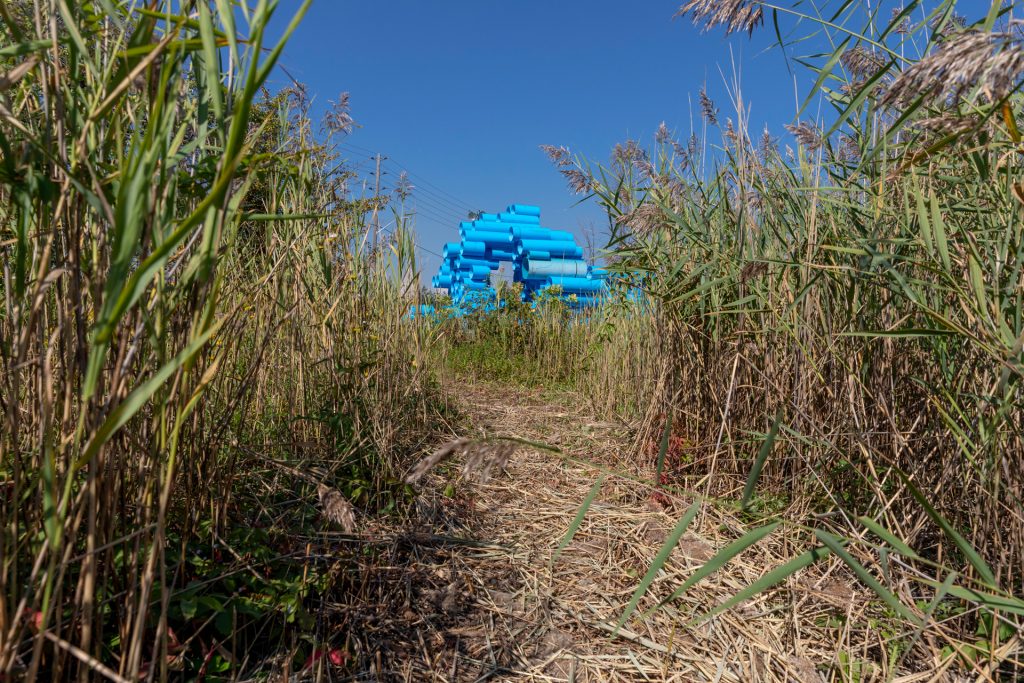 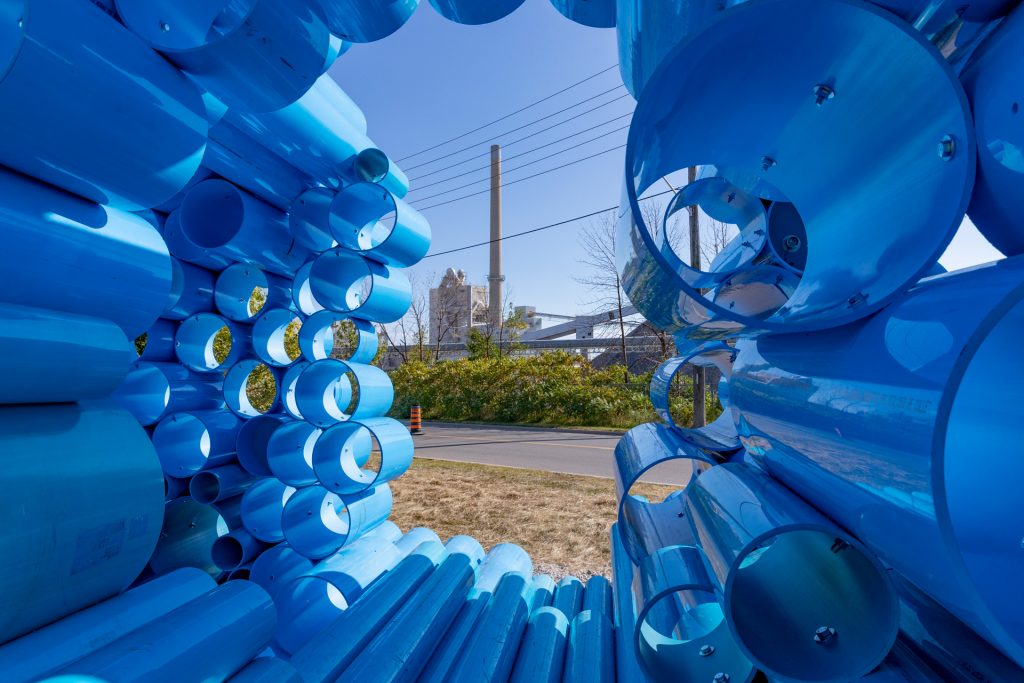 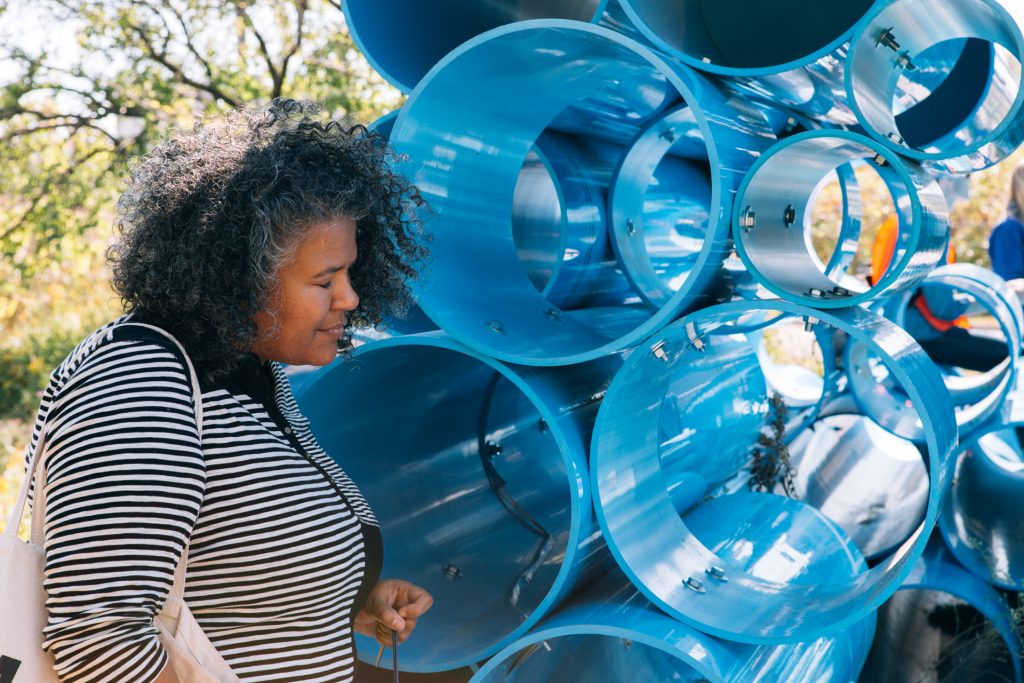 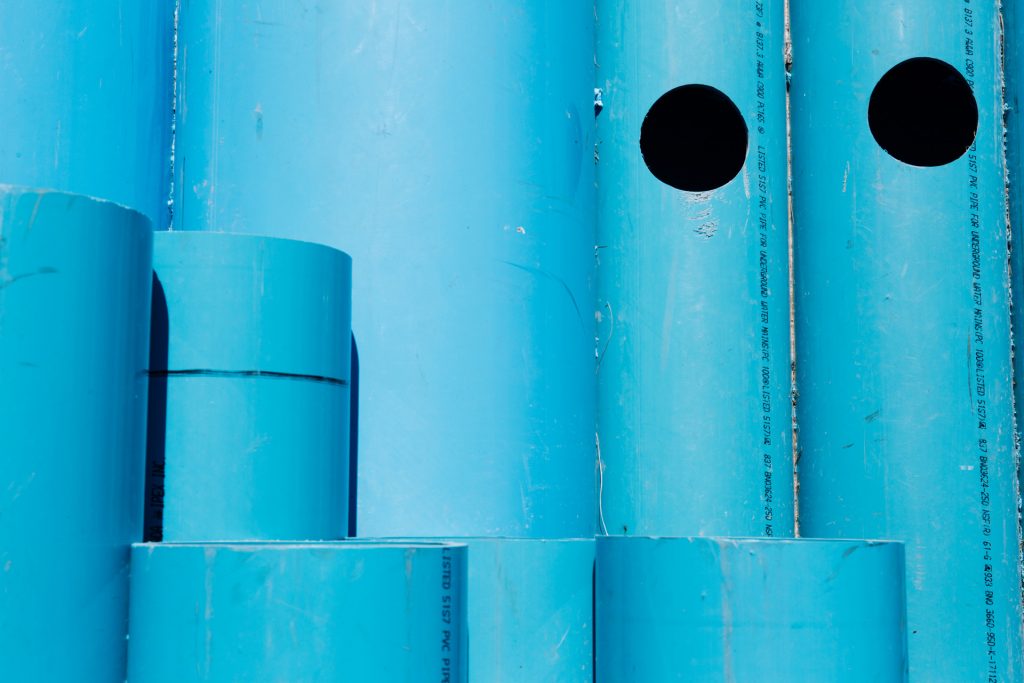 Futurity Island is conceptualized as a space for acoustic experimentation. It serves as an infrastructure that hosts sound compositions and performances that open space for learning.

Pipe is the primary structural and symbolic unit of the Island, referencing both the material that has facilitated worldwide land reclamation of swamps throughout the era of modernity and Bertolt Brecht’s statement in The Radio as an Apparatus of Communication (1932): “The radio would be the finest possible communication apparatus in public life, a vast network of pipes. That is to say, it would be if it knew how to receive as well as to transmit, how to let the listener speak as well as hear, how to bring him into a relationship instead of isolating him.”

In Futurity Island, a network of pipes becomes an artificial skeleton that employs sound to channel what we used to call “nature.” Once used to drain swamps, the pipe becomes a metaphor for a human-centered ecology, an infrastructure of environmental domination and one of the prime symbols of the Anthropocene. Futurity Island appropriates the pipe as an anthropocenic technology and builds a sound infrastructure that brings humans and non-humans into a more symmetrical, collaborative relationship, aiming to transmit and to hear the silenced voices of this planet.

By installing sonic transducers within the structure, Gediminas & Nomeda Urbonas create an organic, reverberating object that opens free space for swampy mediations. The installation also becomes a site for acoustic experiments, using sound as a quaking force that destabilizes both architectural space and the human misconception that we are “builders of the environment.”

Gediminas & Nomeda Urbonas are artists, MIT-based researchers and educators, and co-founders of Urbonas Studio, an interdisciplinary research practice that facilitates exchange amongst diverse nodes of knowledge production and artistic practice in pursuit of projects that transform civic spaces and collective imaginaries. They have exhibited internationally including at the São Paulo, Berlin, Moscow, Lyon, Venice, and Gwangju Biennales, Folkestone Triennial, and Manifesta and Documenta exhibitions (among others). They are the recipients of numerous grants and awards, including the Lithuanian National Prize (2007); a Prize for the Best International Artist at the Gwangju Biennale (2006) and the Prize for the national pavilion at the Venice Biennale (2007). They were also nominated for the Nam June Paik Award in 2012. Currently Urbonas are curating the “Swamp School”–a future learning environment at the 16th Venice Architecture Biennale 2018.

Indrė Umbrasaitė is a Lithuanian-Austrian architect and educator. She is currently an Assistant Professor at the Institute of Architecture, University of Applied Arts in Vienna, Austria (die Angewandte), in the Studio Kazuyo Sejima. Umbrasaite studied architecture in Vilnius and Vienna, graduating from the master class of Zaha Hadid. Prior to that, she studied the history of culture and anthropology and interior design. While she gained her professional experience collaborating with offices in Vilnius, Salzburg, and Vienna on a broad range of projects, her individual work explores creative subjective mapping methods within the architectural discipline, aiming to rethink the relationships of body-space, global-local, socio-cultural, and environmental heterogeneity.

Nicole L’Huillier is a sound artist, musician, and architect from Santiago, Chile. Currently she is based in Boston as a PhD researcher at the MIT Media Lab, Opera of the Future group. Her work explores spatial experience, perception, and the relationship between sound and space, based on the idea of sound as a construction material. She works at the intersection of art, music, architecture, science, and technology in order to open questions about possible futures, redefine how we perceive our environments, and most importantly, trigger connection and empathy between human and non-human agents. Nicole is also part of the MIT Media Lab Space Exploration Initiative, where she explores possible experimental forms and implications of art, expression, and culture as humans migrate to outer space. She is also an experimental musician, drummer, synth-lover, and one half of the space-pop duo Breaking Forms. 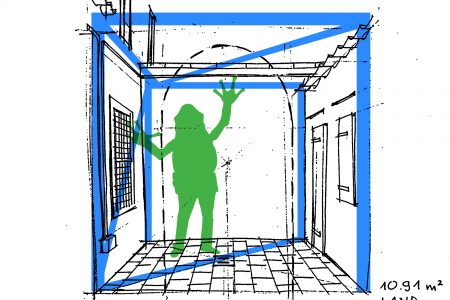